Dr. Pellinore Xavier Warthrop was born to Dr. Alistair Warthrop and his wife. As a child he was raised by a strict and emotional distant father, who cared more about his work as a Monstrumologist than his son. Eventually his father sent to him to boarding school to study abroad. When Warthrop was just a teenager his mom fell ill with tuberculosis and died. Sometime after Warthrop finished school he began to study and research monster just like his father. During an unknown period of time Dr. Warthrop became known as one of the leading experts in Monstrumology. Eventually Warthrop decided to hire James Henry as his assistant. James serves as his assistant for many years before tragically dying in a house fire leaving Will Henry an orphan. Due to James's loyalty the doctor decides to take Will Henry in as his apprentice.

Not much is known about Dr. Warthrop's life before he took Will Henry in. He was born in 1853 to Dr. Alistair and his wife. Eventually, he was sent to a boarding school where he was educated abroad. When he was a teenager his mom developed tuberculosis and died. Heartbroken and blaming his son, who was often sickly, for her death, Dr. Alistar died sometime afterward. After finishing his studies he came back to his home in New Jerusalem and began to study Monstrumology. Eventually, Dr. Warthrop became one of the leading Monstrumologist. During this time he also hired James Henry as his assistant. After a fire kills James and his wife, Will Henry (their son) is taken in as the doctor's new assistant/apprentice.

After Will Henry's parents died in a house fire in 1887, Warthrop (34 years old) took Will (11 years old) into his house at Harrington Lane as an assistant.

When Erasmus Gray brought the body of a dead girl to the house, Warthrop was at once obsessed with the discovery. When an unborn Anthropophagi was discovered inside her womb, Warthrop made it his personal mission to find out how the creatures came to America in the first place. Warthrop convinced Will that the matter did not need to be taken to the authorities, and arranged for Will Henry and himself to be taken to the cemetery, guided by Erasmus.

Upon returning to the cemetary where the body was discovered, the group ran into a group of Anthropophagi. One took hold of Erasmus, and Warthrop promptly shot him in the head, explaining to Will that Erasmus "would have thanked me if he could." As they were unable to make a good count of the creatures, the doctor put off notifying the authorities, believing the Anthropophagi would be satisfied with Erasmus. This hypothesis was proven very wrong once the creatures attacked and devoured an entire family, save one.

Before knowing this, Warthrop and Will Henry journeyed to Motley Hills to meet with Captain Hezekiah Varner, the man who brought the Anthropophagi to America. Varner, who was bedridden, told the pair the entire story from beginning to end. Upon hearing the conclusion of the story, Warthrop discovered maggots growing in Varner and realized he would not survive the night. Warthrop stayed with Varner until he died, after sending Will out into the hall.

After returning to New Jerusalem, Warthrop was called in to investigate the killings, and met Malachi, the sole survivor of the attack. Malachai told the story, and after Will and the doctor investigated the house, Warthrop allowed him to stay at the house. It was about this time that Jack Kearns arrived in New Jerusalem, after being called by Warthrop earlier. Warthrop expressed his disdain for Kearns but worked with him. Around this time, Will told Warthrop his beliefs on why the creatures were in America: Warthrop's father had ordered them. Warthrop took the suggestion that his father had been associating with rebels badly, and only later suggested it could possibly be true.

Kearns gathered together a group of men to put in place the Maori Protocol, which killed most of the Anthropophagi. Using a woman as bait enraged Warthrop, and he gave her to one of the men to take care of. The group went to the Warthrop graves and found the entrance to the Anthropophagi's den. Will Henry went first to scout ahead, and he returned later, to Warthrop's relief.

The climax of the story was not done in the presence of the doctor, though Will narrates that he and Kearns went back to Motley Hill to find out how the creatures had been fed. After finding out, Kearns promptly killed the informant, much to the anger of Warthrop. Warthrop and Will Henry also believe that Kearns was Jack the Ripper. Warthrop also tests Will's blood to see if the parasite that infected him and his father is still balanced, telling Will he would have to learn to do it himself one day.

Curse of the Wendigo

NOTE: Contents are not official statements made by the author of these books and creator of these characters, Rick Yancey, and are also subject to change by any average Joe who knows how to hunt and peck and press the "edit" button. Therefore this document may contain mistakes due to the lack of attention to detail by his fans, and/or average Joes.

The doctor is described to have dark, messy hair and dark eyes that are "backlit". He is tall and thin, as he often skips meals and sleep in pursuit of his research. He is also described to have circles under his eyes, in varying shades of black and grey. He is also handsome, as stated by Lillian Bates ( "the doctor can be quite handsome when he cleans himself up" ) and on a train to New York, a number of women try to flirt with him, to no avail.

Although he seems cold, shallow, and apathetic most of the time, he has shown, on a few occasions, that he cares for the people around him more than he lets on, as in the case of Will Henry. Unfortunately, his empathetic nature is often overshadowed by his ego and ambition. His ambition is so strong that he will do almost anything to achieve his goals even if it means putting the people that are close to him in danger. He prefers logic over emotion, drawing conclusions from data and fact, and makes decisions based on this logic and fact. However, it sometimes steers him wrong, and when he is, he is too hard pressed to admit it. He is also very stubborn.

Although Dr. Warthrop doesn't have many relationships due to his line of work and anti-social behavior. There are several people who have gotten past his defenses and have found a person worth cherishing.

Please do not leave me, Will Henry. I will not survive it. You were nearly right. What Mr. Kendall was, I am always on the brink of becoming. And you - I do not pretend to know how or even why- but you will pull me back from the precipice. You are the one... You are the one thing that keeps me Human.

- Dr. Warthrop telling Will Henry what he means to him.

Dr. Warthrop and Will Henry have a very interesting relationship. Although they do not always get along, Dr. Warthrop has admited multiple times that Will Henry is indispensible to him. Muriel Chanler once told Will Henry that the doctor "frets over [Will] like a mother hen". He is very protective of him, contemplating sending him away multiple times to keep him safe. While Dr. Warthrop initially took Will in because of his father's service to him, he eventually sees Will as more than just his assistant, brought to him by tragedy. However, he is often stoic and aloof, never directly revealing to Will Henry how much he means to him - even denying, at times, any affection whatsoever. He often will only admit to Will Henry that his "services have proven more indispensible than not". Although the doctor often ignores Will Henry he deeply relies on him and has shown numerous times that without Will Henry he wouldn't be able to function properly. In return for Will Henry's services, Dr. Warthrop gives Will Henry a roof over his head and acts like a father and mentor towards the child. Although Dr. Warthrop is described by Will Henry as both "my mentor-and my tormentor", it is clear that they have an intimacy that is closer than that of a father and his son.

However, the relationship between Will Henry and Warthrop deteriorated in The Final Descent. Will Henry's gradual loss of humanity, his willingness to kill, and his inadvertant declaration of war on an Italian gang all angered Warthrop, and the two grew farther and farther apart. At the end of The Final Descent, Will Henry killed Warthrop by feeding him to a monstrous snake that he (Warthrop) had kept locked in the basement.

Dr. Warthrops views and feelings for Kearns can be described with few words. Although they are more like each other then ether would care to believe neither of them like each other and Dr. Warthrop only contacts Kearns as a last resort. Warthrop frowns upon Kearns methods and thinks of them as morally wrong. Kearns upbeat attitude seems to greatly annoy the doctor and its safe to say that Dr. Warthrop dislikes Kearns very much.

Muriel Chanler was once engaged to Dr. Warthrop, though she ended up marrying his best friend. Will remarks that in Muriel, the doctor has found himself. It is clear that even though Muriel didn't marry him, she still loved him, but chose John Chanler because, in the words of von Herung, John "loved her more than he loved himself" (Dr. Warthrop is repeatedly characterized as vain and selfish). She comes to him after her husband goes missing, and later sees him again in New York, where they supposedly kiss. Muriel said that she loved Warthrop, but she also hated him.  Tragically, she ends up dying at the hands of her husband after he goes insane.

John Chanler was once his best friend, though Chanler constantly played pranks on him. They studied Monstrumology together, although for different reasons. Chanler was apparently driven to hunt the Old One (which led to his demise) out of spite for Warthrop, because his wife, Muriel, admitted to him that she still loved Warthrop. 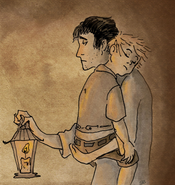 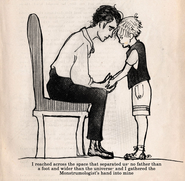 Add a photo to this gallery
Retrieved from "https://monstrumology.fandom.com/wiki/Pellinore_Warthrop?oldid=4524"
Community content is available under CC-BY-SA unless otherwise noted.